skip to main | skip to sidebar

What is it about polar bears?? 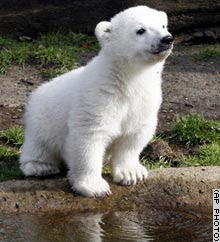 Is that even a real bear, or did Yap get a spring shearing?

look at the paws!
That's Knut, the little cub who is at the Berlin zoo.

Uhm... The fact that you both have kindred temperaments, perhaps?

Or is it the fact that you both look so sweet from a distance, but are equally lethal when someone tries to engage you?

OH! The cuteness! It's unbearable!!!

There is a striking resemblance to KY.

This polar bear needs a hug. How cute is this little cub? Yap be a good boy and go give him a hug for me.

That's the polar cub some groups want to kill because they think it's inhuman to be raised be the zoo keepers?! OMG! How can they think of something like that? *grrr* Just look at that face, full of curiosity and wonder.

That's the little guy that some people insist should die because *gasp* humans saved him and fed him.
http://edition.cnn.com/2007/WORLD/europe/03/19/polar.bear.ap/

They're just soooo tooot! And I should know. I'm from Alaska. ;) One word of advice though. If you ever visit one at a zoo, don't get too close. They like to eat shoes and sometimes they take a little flesh with it.

My house is decorated in early polar bear obsessive, I have 3 polar bear tattoos, I drive a white car with a polar bear related license plate, and my first manuscript's title is "Life, Love, and a Polar Bear Tattoo". I don't know what it is about polar bears either, but whatever it is, they're good at it. They've certainly taken over my life.

And that cub is the cutest thing since KY.

Heather (who might need just a bit of therapy)

When I was a kid, we got a puppy who bore a striking physical resemblance to this little guy. So we named him "Bear" of course.

Read this if you don't believe me.

If this happens to you, don't expect sympathy from Alaskans. We always side with the bears.

It's sad that they are going to be extinct soon.
Damned global warming!
We suck!

Awwww.. I just want to hug him and squeeze him and make him my own. . . and then feel my bones crush within my body as his mommy mauls me with her jaws of death.

He's almost as cute as KY.

Knut's adorable. But when polar bears reach full size, their heads are too small in proportion to their bodies, so they're not as aesthetically attractive as brown bears or grizzlies.

Take a good look.... Our grandchildren stand no chance of seeing a real one in the wild if we keep f*#%ing up the planet.

And if you like your cuteness set to music (including, naturally, the Dallas theme) try this video.

That's the little guy that some people insist should die because *gasp* humans saved him and fed him.

Those horrible humans.... This idea of killing the polar bear just echoes with a resounding WTF??

Some people need to have their heads examined. (the ones who want him dead, not the people who saved him).

How could you look at that face and not fall in love? *sigh*

Did you know that polar bear hemorrhoids are called "polaroids?"

They're cute when they're young which is a mammalian staple. They also live and hunt on ice that is shrinking rapidly, and curiously, the subject of my novel making the rounds and in the S&S contest.

Huh, one poster seems to get the reference. This means most people are reading and not watching TV.

Alas, I watch TV and I think these "so called" animal rights activists are nothing more than disciples of Kevorkian.

As one local commentator said, these same people would holler bloody murder if the bears were hunted for food or fur.

And by this reasoning, babies abandonned by their mothers, should be left to die.

I say bless the zookeepers. The cub is happy and healthy and a joy.